Flushing Money Down the Drain:The Cost of Leaky Faucet 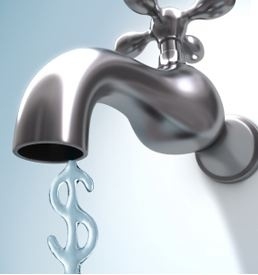 We associate leaks with freezing weather and lots of rain, but in fact they happen all year round. High traffic in the bathroom from summer visitors? Leaks. People yanking the hose around the garden? Leaks. Children clawing their way up the kitchen sink to get at the taps? Leaks. When you’re spending more time outdoors and the weather is warmer, you’re actually less likely to notice dripping taps or a cracked exterior pipe.

Water is relatively cheap but it isn’t free: a simple dripping tap can end up costing the equivalent of a dinner out – for two people, and a split pipe in the garden could be a holiday. This is before the cost of the damage water can cause. Aside from this, we are increasingly aware that water is a precious resource. Wasting water is like wasting food. It’s just not right. It also adds up: 1 trillion gallons of water is wasted in private residences every year. One trillion is such a large number that we can’t conceptualise it. Here is a trick from mathematician John Allen Paulos. 1 million seconds is roughly 11 days. 1 billion seconds is nearly 32 years and 1 trillion, nearly 32,000 years. That’s a lot of drips per second.

The pernicious leaks are the ones you can’t see – a cracked pipe is leaking into a supporting wall. If your water is metered, here is a simple trick: Turn everything off and read the meter. Wait one hour. Read it again. If it’s moved, there’s a leak.

There is some good news – most leaks are cheap and easy to fix: faucets and toilets. It’s not always clear when a toilet is leaking, but there is one simple way to find out: Get some water-soluble, organic-based paint (like a child-safe watercolour or food dye), mix up a cup of coloured water, pour it in the tank and wait 15 minutes. If there’s coloured water in the bowl, then you know the tank is draining and wasting water. Whatever the outcome you can at least enjoy a rainbow flush!